London Blitz: where the bombs fell

While an attempt to understand the scale and destruction of the London Blitz some 75 years after the event isn’t difficult, it can feel somewhat distant. Stats like, eight months of consistent bombing; 43,000 casualties; over 50,000 tons of high-explosive bombs certainly speak to the horror, but a project by the University of Portsmouth has brought it to life in a remarkable new way.

Thanks to Geographer Dr Kate Jones and her team, you can now see exactly where the bombs fell with an interactive map. The map, which was funded by charity JISC, uses data previously available only by viewing in the Reading Room at The National Archives. Now it is available to anyone who wishes to explore where the bombs fell. The map also includes any further information, photographs and memories available from that period and place. 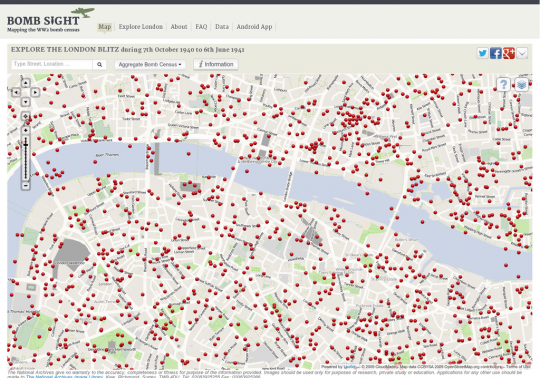 The team behind the project explain how it was created, "The project has scanned original 1940s bomb census maps, geo-referenced the maps and digitally captured the geographical locations of all the falling bombs recorded on the original map."

The map is a fascinating and grounding way to explore the horrors of the Blitz. Here at HISTORY we’ve taken a look, and according to the map the location of our offices in West London was bombed, but this is hardly surprising, the number of bombs (shown as red dots on the map) is truly shocking.

“We can take it!” was supposedly the unofficial motto of the British people during this period, and as the map shows, they absolutely did.

What's in a name? Where does your hometown name originate?

Mind the Gap: The history of London Underground

Area 51: From Roswell Rumours to the Present Day

What's in a name? Where does your hometown name originate?

Mind the Gap: The history of London Underground

The mystery of the Amber Room: the world's greatest lost treasure

The strange and unlikely history of St George

Roald Dahl and 'The Irregulars', the British spy ring in 40s America

Hadrian's Wall and the River Eden

How a Viking laid the groundwork for the King of England

The Battle of Britain