A brief history of 'Endurance' and its remarkable discovery

The Endurance was trapped in pack ice for months before finally sinking.
Adventurers

When Ernest Shackleton’s ship, Endurance, was discovered on 5th March 2022, exactly 100 years after Shackleton’s funeral, it was the first time it had been sighted in 107 years. Pictures of the legendary vessel sat over three kilometres under the Weddell Sea were both poignant and profound, marking the final chapter in a story of extraordinary courage and survival.

Expedition leader Ernest Shackleton, his 27 man crew, 69 dogs, and one cat, Mrs. Chippy, set sail from Plymouth on 6th August 1914 as part of the Imperial Trans-Antarctic Expedition. Endurance, a schooner barque, was a three-mast vessel powered by coal and sail. The ship wasn’t just state of the art, it had been scrupulously built to withstand the crushing pack ice that was anticipated in the Antarctic.

However, Endurance was initially launched some five years before as ‘Polaris’, designed as a commercial enterprise for carrying wealthy tourists and hunters to this new world of ice, solitude and, indeed, seals and polar bears.

The business ran into difficulty, and Shackleton, already a public hero and renowned explorer, bought the vessel off the owners for less than it was worth, and had it re-fitted for purpose.

After meeting his vessel in Buenos Aires on 27th September, Shackleton and his crew left South Georgia with Endurance pointed towards Vahsel Bay in the Weddle Sea: 2,800,000 square km of water lying at the northernmost part of mainland Antarctica. From then on it was pretty much a slog against the ice.

Two months later, the Endurance became trapped. She drifted northward in the pack ice throughout the Antarctic winter of 1915 and on 21st November, the ship was finally crushed into submission and sunk beneath the surface. 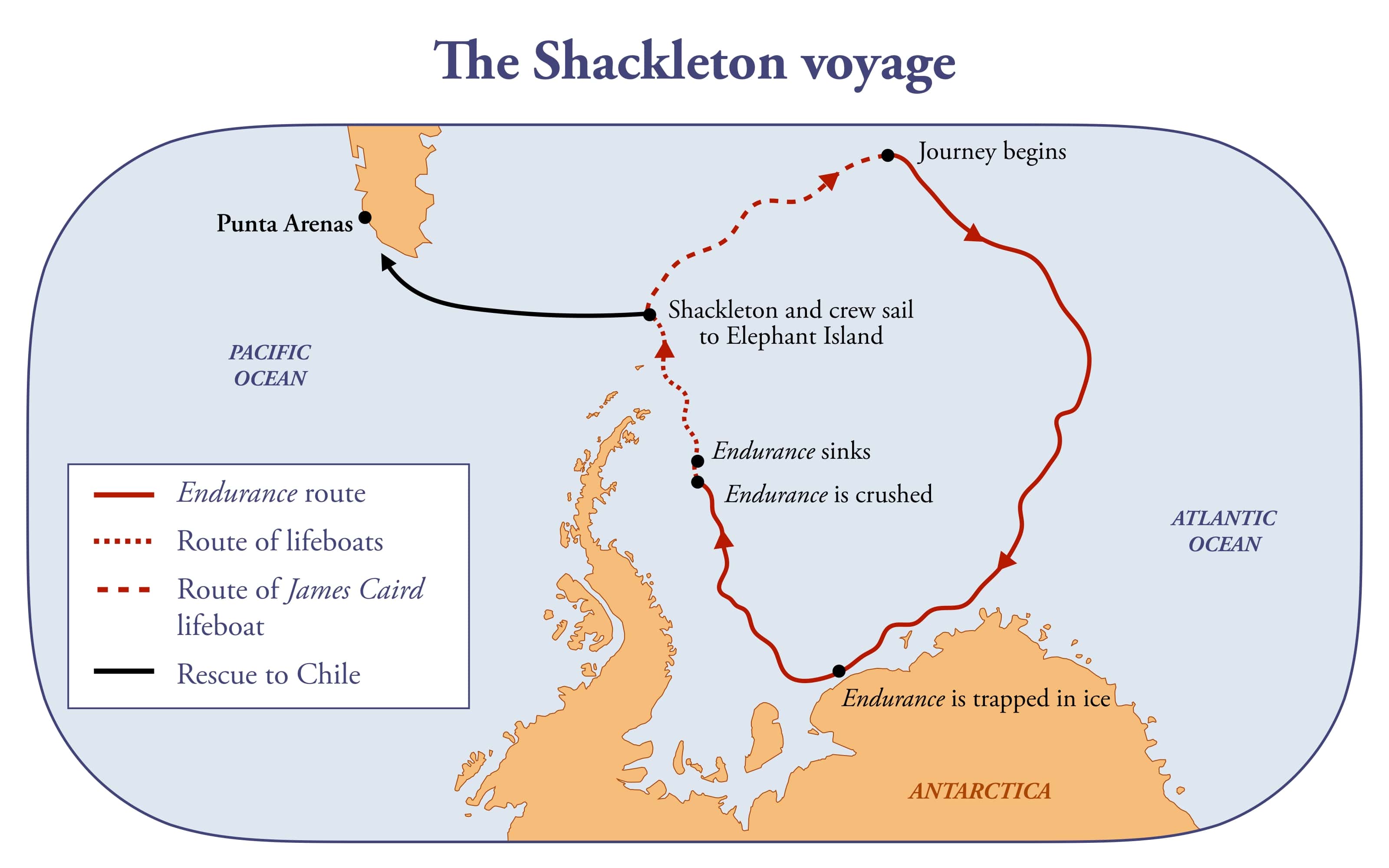 The crew, who’d escaped the Endurance by camping on the sea ice until she disappeared, evacuated their position by lifeboat and landed safely on Elephant Island, surviving on diminishing supplies of seal and penguin meat.

Facing starvation, Shackleton and a small crew sailed over 800 perilous miles in 16 days across the treacherous Drake’s Passage in a small boat, where it landed safely on South Georgia. The whole human crew was rescued within four months and Ernest Shackleton’s reputation as one of the greatest explorers in history came to pass. Sadly Mrs. Chippy and the dogs weren't so lucky.

107 years later, the Endurance was found off the coast of Antarctica, approximately four miles south of the position originally recorded by its redoubtable captain and navigator Frank Worsley, a key figure in getting the crew to safety.

The team responsible for the finding, Endurance22, had already failed to locate the Endurance in 2019, but Dr. Shears, leading the operation with marine archaeologist Mensun Bound, was more optimistic when they set off in February 2022. This quiet confidence was bolstered by ice maps obtained from the German space agency and a pair of autonomous underwater vehicles (AUV) that had been upgraded after the previous AUV disappeared just 20 hours into the mission.

The coolest and creepiest Antarctic mysteries

Still, constantly moving ice floes, treacherous conditions - even the accuracy of Worsely’s sextant and theodolite coordinates - meant that just locating the site of Endurance’s sinking was problematic. And no-one had any clue as to the condition of the ship once located. It was even speculated that the wreckage could well be strewn miles over the seabed, assuming it had survived at all.

All of the former made the site of the Endurance, frozen in time while human history has played out over two miles above for over 100 years, even more esoteric. The ship itself is still in excellent condition, with Mensun Bound describing it as by far the finest wooden shipwreck he has ever seen.

For now, at least, the wreck will not be salvaged but left to lie deep beneath the waves, in the peace of the cold, dark sea with all her earthly possessions and long, past memories.

Unusual facts about the Queen: Why does she have two birthdays?

The Grandmother of Europe: Queen Victoria's family ties across the continent

A brief history of rock climbing

Birth of the Vikings

Can you escape from Alcatraz?

Alcatraz Search for the Truth

How well do you know your pirates?